Student Broadside Collection
JavaScript is disabled for your browser. Some features of this site may not work without it. 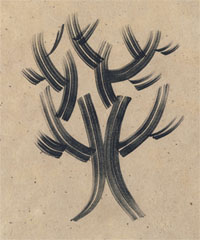 The collection includes thirty-one poetry broadsides from Frank Tierney&rsquo;s Spring 2008 Typography 3381.301 and 3381.302 taught at Texas Tech University. The project represents the cumulative final project which incorporated typography, graphic design, and poetry. Students chose one of four poems to produce their broadsides. They are as follows: &ldquo;Following Krill&rdquo; (Concho River Review, Fall 2003, vol.18.2, 101), &ldquo;After the Tornado&rdquo; (Borderlands Texas Poetry Review, Spring/Summer 2006, vol. 26, 50), &ldquo;Dreaming After the Tornado&rdquo; (Isotope, Fall/Winter 2007, vol. 5.2, 49), and &ldquo;Witnessing,&rdquo; (Amarillo Bay, Spring, vol. 7.1, e-journal), all written by Dr. Diane Warner who publishes as Diane Hueter. The poems&rsquo; versions in the broadside collection do not represent the poems as they first appeared in the journals noted above.

Collections in this community